The Chancellor of Unhas (Prof. Dr. Ir. Jamaluddin Jompa, M.Sc.) and his staff, the Dean of the Faculty of Agriculture Prof. Dr. Ir. Salengke, M.Sc., who served as Chairperson of the 66th Anniversary Committee, cooperation partners, and the entire Hasanuddin University academic community all attended the event, which had the slogan “UNHASku BERSATU UNHASku KUAT.”

The Dean of Faperta introduced the activity and gave a speech in which he thanked the invited people for coming. In his remarks, he detailed the extensive preparations that the Faculty of Agriculture and the Faculty of Nursing had undertaken since June as the organizing committee for this year’s Dies Natalis.

Prof. Salengke stated, “The committee has divided into parts to handle each activity, and insha’Allah, following this launching event, all committees will proceed uniformly to complete every program, every action that has been completed.”

Prof. Jamaluddin, the Chancellor of Unhas, spoke after that. According to the theme, every Dies Natalis celebration should be utilized as a catalyst to refresh many things, including the dedication to achieving the University’s goals, according to Prof. Jamaluddin.

Prof. Jamaluddin continued, “We want Unhas to be able to contribute again, to be present in the community, and to offer solutions, but none of that is feasible if we don’t come together”. On the same day, he also stated that the tagline Unhas united was intentionally created to foster greater togetherness than before, particularly in the face of outside elements like the Covid environment, which persisted despite being much better. 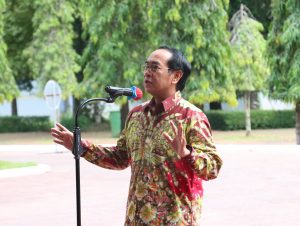 A pinisi boat floating across the ocean with a globe in the background served as the direct launch of the 66th Anniversary logo by Prof. Jamaluddin before the event came to a conclusion. The 66th Dies Natalis celebration was commemorated by releasing 66 pigeons as the event’s last act.